Are you visiting Los Angeles? You should try this Hollywood Scavenger Hunt to visit this area! Of course, it will take you around the neighborhood to the Dolby Studio, Capitol Records Building, the Crossroads of the World, and of course the Walk of Fame. Moreover, on this Hollywood Scavenger Hunt, you will face challenges, riddles, and enigmas at every step. As well, you will learn some history and great local tips.

We visited Hollywood in 2017, in 2002, and back in 1988. On each occasion, we took time to walk this neighborhood, taking plenty of photos and notes.

In fact, Hollywood is a neighborhood located in central Los Angeles. You now know it as the home to the film industry. However, if you will be visiting any of the film studios, you will quickly realize that they are not located in Hollywood anymore. It was originally incorporated as a municipality in 1903. Actually, its origins go back to 1870.

The origin of the name Hollywood is actually quite funny. In 1886, when H.J. Whitley (Father of Hollywood) was on his honeymoon in this area, he came upon a Chinese man in a wagon carrying wood. The man got out of his wagon and bowed. When Whitley asked him what he was doing, the man replied, “I holly-wood”. That was his pronunciation for “hauling wood”.  Whitley decided to call this area Hollywood as another meaning for him was Holly to represent England and wood to represent his Scottish heritage. Whitley had already started over 100 towns across the western United States by that time.

Did you know the motion-picture business started here in the early 1900s? The first studio here was the Nestor Company in 1911. Then, by the 1920s, four major studios were already here: Paramount, Warner Bros, Columbia, and RKO. Incidentally, the term Tinseltown was coined around that time.

The Hollywood sign was originally built in 1923. Back then, the sign read “Hollywoodland” and it was only supposed to be up for 18 months! However, it is still here 90+ years later, with a few letters missing. And as they say, the rest is history. As for the history, you will learn a little more about it on this self-guided walking tour/tourist scavenger hunt. 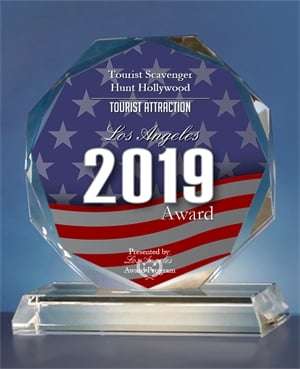